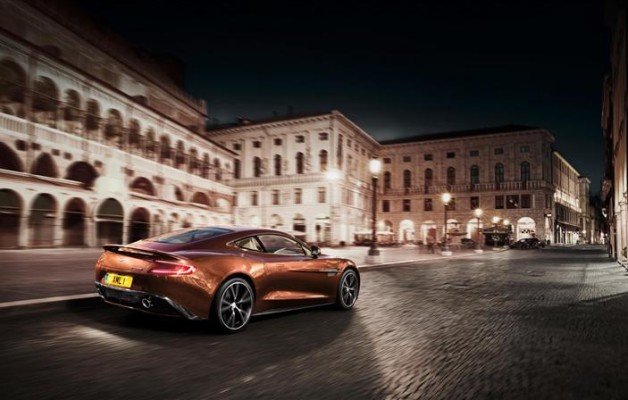 
Aston Martin has officially unveiled new Vanquish supercar, who came to replace the ageing DBS. According to the automaker, the new product has surpassed its predecessor in almost all aspects. Speaking of the appearance of the new Aston Martin Vanquish , the design can be called evolutionary. Outlines of coupe resembles the model DBS, but the exterior design elements are similar to exclusive One-77 supercar, which was released a limited edition in an amount of seventy-seven pieces.

Overall length of Vanquish is 4720 mm, width 2067 mm and height 1294 mm. It has an identical wheelbase as of DBS at 2740 mm, the new Aston is 5 mm wider and 14 mm higher. The interior consists of new items and designed to be as spacious as possible in all directions. The amount of luggage space is up by 50 litre making it 368 liters.

The basis of Aston Martin Vanquish 2013 model is a new platform structure in which the aluminum and carbon fiber are used as major componenets. In addition, all new coupe body panels are made ??of carbon fiber coated with a special polymer layer. Compared with DBS, the torsional rigidity has increased by 25%, and the weight is reduced by 55 kg to 1739 kg. Also located in the front is power unit which is 19 mm lower than before, and weight distribution reached the ideal ratio of 50:50. The engine itself is upgraded from V12 Aston Martin DBS and develops 573 hp. Vanquish generates a peak torque of 620 Nm.

Power is transferred to the rear axle via a six-speed automatic transmission touchtronic and a limited slip differential. Aston Martin Vanquish accelerates from 0-60 mph in 4.1 seconds (0.3 faster than its predecessor), and has a top speed of 183 mph. In addition, Vanquish boasts an adaptive suspension with three modes. Also available are powerful carbon-ceramic third generation Brembo brakes, a Launch Control system for a quick start, as well as 20-inch wheels on sports Pirelli P-Zero tires developed by Italian tire manufacturers especially for this model.

Aston Martin Vanquish by deafault is a two seater supercar, but with an extra charge it can be equipped with rear couch. Price of a new Aston Martin Vankvish in the UK start at £ 189,995. European sales of new supercar will start at the end of this year.