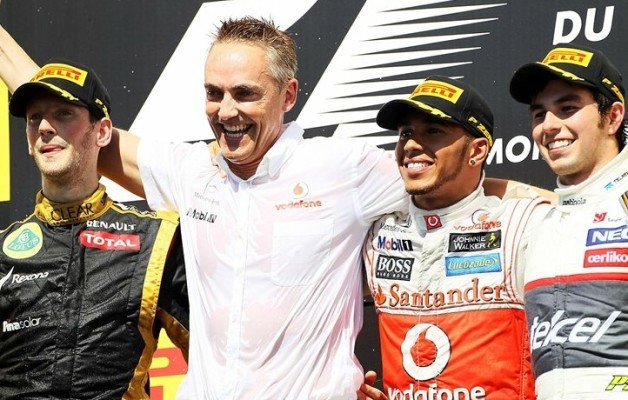 
Lewis Hamilton claimed victory at Canadian GP. Surely this is one of the most exciting year in Formula 1 history as seven different drivers claimed victory in seven races. Lewis Hamilton is now on top of championship with 88 points ahead of Fernando Alonso at 86 and Sebastian Vettel at 85. Romain Grosjean and Sergio Perez finished strongly to complete the podium at second and third position respectively.

Start of the race was fairly quiet and all drivers were able to avoid any conflict. It started after first pit stop when Felipe Massa managed to get around Nico Rosberg in the battle for fifth place, but Brazilian made a mistake which resulted in roll back. Sebastian Vettel maintained lead and steadily went ahead, controlling the gap between rivals. While approaching for first pit stop he lost the advantage. As Lewis Hamilton was on a two stop strategy and everything was going well in Mclaren pits, he immediately after exiting pit lane put a fight with Fernando Alonso to gain position ahead of him.

It was a bad strategy by Ferrari as Fernando Alonso had to stop for a pit stop with just 7 laps left in race. This cost him considerable position and slipped to fifth place.  Nico Rosberg finished close to Alonso at sixth and Mark Webber at seventh place. Kimi Raikkonen, Kamui Kobayashi and Felipe Massa scored points and finished at eight, ninth and tenth place respectively.

Michael Schumacher suffered a setback in the race as his Mercedes DRS got stuck in open position and even four mechanics were not able to close it which forced him to retire. Last year winner Jenson Button finish at sixteenth place.

Fernando Alonzo had won European grandprix in a spectacular race. Sebastian Vettel and Lewis hamilton both had to retire leaving the spaniard at 111 points...read more →

Lamborghini had revealed its latest supercar Aventador Jota at Geneva motor show. It is a two seater roadster based on Aventador with open body, no...read more →

We all remember futuristic BMW i8 coupe which was driven by Tom cruise in Mission: Impossible – Ghost Protocol. BMW now has unveiled i8 spyder...read more →